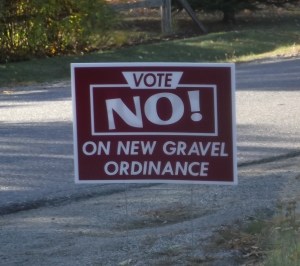 Lamoiners who attended the public hearing on October 22 at the school gymnasium noted the overwhelming public opposition to the Selectboard’s proposed Gravel Ordinance. Friends of Lamoine has gotten the word out with signs and mailers, but we can’t assume that rejection of this gravel-friendly ordinance is a “done deal”. Not only will the opposition be very motivated to vote, but if the NOs win with a slim margin, it will be too weak to be considered a mandate. We must deliver a margin similar to our No New Pits vote in June of 2014. In that vote we achieved a nearly 2 to 1 margin of victory and a heavy turnout: 450 to 268.

Since then, our Board of Selectmen have shrugged off that mandate and continue to insist that fair Lamoine government puts most of Lamoine voters on an equal footing with those who would see open-pit mining forever, or at least as long as there is gravel to mine.

Many Lamoiners lament that our town is torn by conflict between the two sides, but even more complain about dump trucks, bad roads, noise and dust, unrestored pits and lowered home values, all part and parcel of industrial gravel mining. We need to send a message that the majority of Lamoiners are serious about reining in the size and impact of this industry in town.  The important next step is yours! Vote NO on the proposed Gravel Ordinance on Tuesday, November 3, 2015, 8 AM to 8 PM at Lamoine Town Hall, 606 Douglas Highway, Lamoine, ME.

“To waste, to destroy our natural resources, to skin and exhaust the land instead of using it so as to increase its usefulness, will result in undermining in the days of our children the very prosperity which we ought by right to hand down to them amplified and developed.”
― Theodore Roosevelt, seventh annual message, 3 December 1907

"There is nothing like surface-mining to snatch the graces and beauties and benignities out of a paradise, and make an odious and repulsive spectacle of it."
---Mark Twain, Following the Equator

"Mining is like a search-and-destroy mission” --Stewart Udall, US Congressman, Secretary of the Interior

This is for those who use RSS feed. Get new content email notifications just under top of middle column.